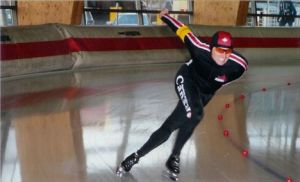 “The weather was so unpredictable,” says Frost, deaf-blind speed-skater from Orleans. “I just tried my best and had fun.”

Frost’s best performance was during a new race called the 100 meter dash. He came in fourth place overall and second place in his age category. He also participated in a team pursuit with three other skaters. His team came in fourth, missing a bronze medal by 0.3 seconds.

“The races were difficult. I had to fight a lot with the wind,” says Frost about his experience on the ice in Halifax. “But in the end I still came home with a medal. I am proud of myself.”

Frost hopes the weather stays cold in Ottawa so he can hit the ice and start training for the World Championships at the end of February.

“I love competing and winning like any other athlete,” says Frost. “But, I compete to raise awareness about deaf-blind speed-skating. My goal is to have speed-skating included in the Russia 2014 Paralympics Games.”

Frost is always ambitious and hopes to bring home yet another medal.

Kevin Frost has Type 2 Usher Syndrome, a genetic condition that has left him with 90 per cent hearing loss and only 5 per cent of his field vision. This challenge has not stopped him from breaking records in short- and long-track speed skating. Kevin is currently ranked 19th in the world among able-bodied athletes. His mission is to see speed skating included in the Paralympic Games.