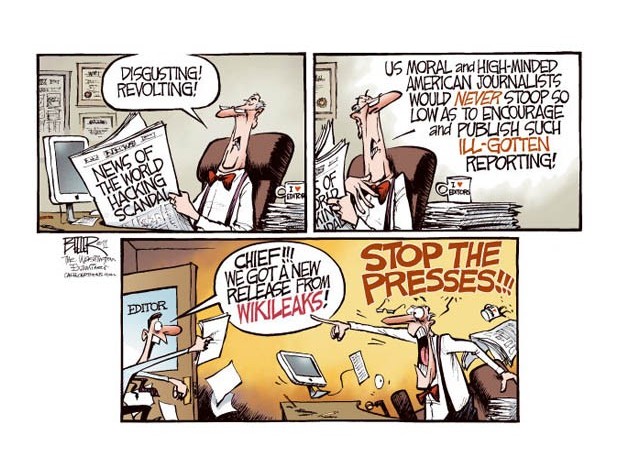 As someone in the communications world, it is important we keep up to date with current news and affairs.

A big story in the news right now is the phone hacking affair.

Here is a perfect little summary that gives the basic information as to what this phone-hacking-Rupert-Murdoch thing is all about.

The News International phone-hacking scandal is a controversy involving the News of the World, a British tabloid newspaper formerly published by News International, a subsidiary of News Corporation. Employees of the newspaper were accused of engaging in phone hacking and obtaining illicit information by bribing police officers and exercising improper influence on politicians and the police. The results of investigations conducted from 2005–2007 reached the conclusion that the practice of phone hacking was limited to celebrities, politicians and members of the British Royal Family. However, in July 2011, it was revealed that the phones of murdered schoolgirl Milly Dowler, relatives of deceased British soldiers, and victims of the 7/7 London bombings were also accessed, resulting in widespread public outrage. Advertiser boycotts contributed to the closure of the News of the World on 10 July, after 168 years of publication.

British prime minister David Cameron announced on 6 July, that a public inquiry would convene to investigate the affair after police investigations had ended. On 13 July, Cameron named Lord Justice Leveson as chairman of the inquiry, with a remit to look into phone hacking and police bribery by the News of the World, while a separate inquiry would consider the culture and ethics of the wider British media. He also said the Press Complaints Commission would be replaced “entirely”. The inquiries led to several high-profile resignations, including Les Hinton, a subsidiary chief executive, News International’s legal manager Tom Crone, and its chief executive Rebekah Brooks. The commissioner of London’s Metropolitan Police Service and Britain’s most senior police officer, Sir Paul Stephenson, also resigned his post. Former News of the World editor Andy Coulson, the paper’s former executive editor Neil Wallis, and Brooks were all arrested. Rupert Murdoch and his son James were summonsed to give evidence before a parliamentary media committee.

The negative attention garnered by the scandal eventually reached the United States, where News Corporation is headquartered and operates multiple media outlets. The Federal Bureau of Investigation launched an investigation on 14 July, to determine if News Corporation violated the Foreign Corrupt Practices Act and accessed voicemails of victims of the 9/11 attacks. On 15 July, U.S. Attorney General Eric Holder announced an additional investigation by the Department of Justice.

If you are still curious and want to know more, I suggest you read the following articles I found: