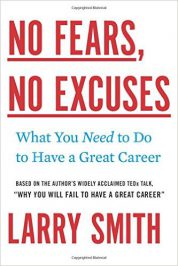 Welcome to Young PR Pro’s first ever book report. Just like when you were in elementary school, I will present a book report, complete with main characters, plot summaries and lessons learned, but without the anxiety and squeaky voice of a 12 year old.

This book report is on No Fears, No Excuses: What You Need to do to Have a Great Career, by Larry Smith, professor of economics at the University of Waterloo. I had the pleasure of auditing one of Larry Smith’s economic classes back when I was in University. I was visiting Queen’s student, visiting my boyfriend who told me about a really interesting professor he had. So I snuck in the back of the classroom and listened to the first 20 minutes of his lecture. As I glanced around, I realized I wasn’t the only infidel student trying to catch a free class. Smith welcomed his non-students and students alike as he presented his weekly take on the economic state in Canada and around the world.

In his talks and in every day conversation, Smith can be very blunt. He became a household name when he presented a TEDx Talk titled Why You Will Fail to Have a Great Career.

He got so many emails – both angry and happy – regarding his talk, he decided to write a book, giving him a chance to dive deeper into the meaning behind his TEDx Talk.

I was one of the angry people. I didn’t send an email, but I vented to my husband, trying to find holes in all of Smith’s arguments. In essence, I was being defensive – because, I admit it now, Larry Smith you were right.

His 10-minute talk was not enough to explain the intricacies of the modern day world of career building. Nor will this 5 minute book report. But my goal is not to explain Smith’s arguments, but rather get you excited enough to read the book.

So what does Smith mean by a great career: a career is great when it offers satisfying work, impact on the world, a dependable and adequate income, and personal freedom. Take a moment to evaluate your career. Does it hit all the marks?

Smith starts off with a fair picture of our job hunting society. Things have changed, yet people still hunt for jobs and build their careers based on decade old advice. We live in a world of disruptive technology and ideas, whether it is IBM being blindsided by Microsoft, or Uber destabilizing the taxi industry. Companies are surviving differently in the 21st century, which means they are hiring differently. Smith says it is time for a new strategy.

Okay, now you know what a great career is, and Smith has painted a high competition Hunger-Game like environment to search for your next job. And then he says – you need passion. Passion does me no good in a survival of the fittest job hunt. A need a weapon.

After a long winded talk of the importance of passion, he gets down to business and gives you the weapon: a career building strategy. He offers a step by step approach to finding your true passion, building and cultivating your talents and skills, and landing a job that not only is fulfilling, but pays.

He talks of the importance of having a team, which is different than a network. Young PR Pros has said a thousand times that you will get nowhere in your career if you do not network. Smith takes it a step further. He does acknowledge the importance of a network, but he stresses the importance of a team. What’s the difference? A network of people you know, and who think of you in a positive way, is one of the pools from which you recruit your team. Unlike a network, which should be so big you cannot from memory recall all of its members, a team is small, cohesive, and ready and able to help achieve your career goals. The network is available, while the team is on-call.

Smith also touches on a very important aspect of career building: fears and excuses. How many of us have passed up an opportunity because we were afraid, or found an excuse like it isn’t a good time right now. Remember how I said Smith can be blunt, well he doesn’t filter himself in his book. Be prepared to hear some good harsh truths.

Smith wraps up the book with an aptly named conclusion: taking action. This is the part of the book where you take what you have learned and start putting some of it to use. Smith even lays out conversations you should have with spouse, family and friends.

I bought the book out of spite. I was going to read it and boast that it was nothing but a poorly written self-help book. But, I couldn’t. Smith has re-invigorated the passion I feel in my career and has pushed me to strive for more. Smith used stories and easy colloquial speech to make this book and easy read.

Whether you are just beginning your career, or have had many years to contemplate your career, Smith’s book is a must-read if you are looking to have a great career.